The Dawning of the New Age - Chapter One 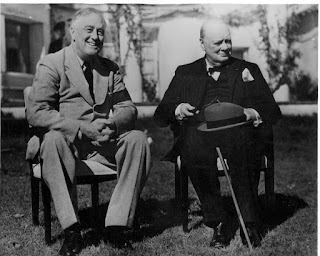 The date was January 16th, 1943. The Casablanca Conference between Roosevelt and Churchill started two days ago, and on the streets of Berlin the sound of tank and jeep engines echoed throughout. A Nazi military convoy was heading for a point two miles east of Berlin where an old abandoned building was situated. They were going to this building on the express orders of Hitler himself, and they were being commanded by none other than the Ultra-Humanite herself, who sat in the front passenger seat of the lead jeep.
It did not take long for the convoy to reach the old house, mainly because the traffic moved out of the way as soon as they saw the tank approach. The Ultra-Humanite was not far behind them. A lowly lieutenant approached her.
“This is the house.” he said. “But it looks as if no one is here.”
“Appearances can be deceptive.” said the Humanite. “You will go on and find the one we are looking for.”

A group of six soldiers neared the hours. After hesitating for a few seconds they entered. All was quiet for a few minutes until two soldiers came running out with their backs on fire. Gunfire could then be heard, followed by three more soldiers running out with a burst of flame not far behind them. Finally the last soldier ran out, this time with a melting rifle in his hands. He ran over to the Humanite.
“He is powerful!” he shouted. “There is no way we can make him come with us!”
“Fools!” she snapped. “You are weak! I will get him myself!”
Taking her piston in hand the Ultra-Humanite slowly walked into the building. The first thing she noticed was the small. It was as if something had died inside. Then after walking through a few more rooms which were in a similar state she heard a noise at the back of the house. It appeared she had found the man she was looking for. Raising her pistol she entered the room at saw her target sitting on the floor facing the door. A smile appeared on her face. It appeared she had found what she was looking for.
“You!” she shouted. “Detlev Heiss! You will come with me! You will serve the Fatherland!”
She began to walk into the room when suddenly a tall man blocked her path. The man had black hair with a few flicks of grey, and a pointed black goatee beard. The Humanite was shocked and surprised by his appearance.
“Herr Heiss will not be going with you to serve your Fatherland.” he said. “He will be serving me!”
“And who are you?”
“My name is not important to you. Now please leave. I have work to do.”
The man turned his back on the Ultra-Humanite and placed his hand on Heiss’ head. This did not please the Humanite, and she raised her pistol. She was about to fire when suddenly she found the bullets popping out of the bottom of the handle. The man turned round, and two beams of energy came out of his eyes, struck the Humanite, and sent her flying against a nearby wall. Then a glow covered both men, and once again the man began to speak.
“Detlev Heiss, from this day forth you shall be known as Fire-Flash. Your power has been increased ten-fold! Now demonstrate to me your total and undying loyalty!”
And with a flash of light the stranger vanished, leaving Fire-Flash on his own. The German extended his arms, and the room began to glow. A few seconds later there was a massive explosion  as the entire house went up in smoke. The lighted form of Fire-Flash then flew off into the sky. The soldiers outside could do nothing but watch.

Several weeks later, on March 2nd, R.A.F. bombers attacked Berlin, causing extensive damage. At the same moment in time the U.S. aircraft carrier, the U.S.S. Enterprise, was in the Atlantic Ocean, fifty miles off the coast of Iceland. They could expect attack from German U-Boats at any minute. They did not expect to be attacked in the manner they were. High above in the sky a streaking red and tallow light could be seen. The deck crews had no idea what it was. All they could do was watch and wonder. Wonder soon changed to fear as the streaking light dived low near them, turned around, and then flew back towards the ship. Then, the attack began. Bursts of what appeared to be fire came flying towards the deck crews and the aircraft which were on the deck. There were explosions was fuel was ignited by the bursts. Attack was followed by attack. The gunners tried to fire back with their shells and bullets but they could not aim at their attacker because he was moving so fast. Aircraft could not be launched because they were destroyed just as they were about to take off. It was all over in a manner of minutes. All aircraft were destroyed. Most of the personnel were badly injured and burned. For all intents and purposes the Enterprise was inoperative.

March 4th, two days later. The British warship H.M.S. Lohengrin was in the Atlantic ocean, not far off the coast of Norway. They had been informed about the attack on the Enterprise and they were on full alert, half-expecting this strange flash of light to attack them. They should have fully expected an attack. It hit them like a bolt out of the blue. They didn’t know what hit them. Before they could do anything all guns and armaments had been melted by this strange flashing streaking light. As with the U.S.S. Enterprise the Lohengrin was now inoperative.

March 7th. News of these attacks greatly concerned President Roosevelt and Prime Minister Churchill, and it was because of this that Mr. Churchill called a special meeting at 10 Downing Street. The first to arrive was an Admiral Nicholas Billiar, and next was General Dwight Schwartz of the U.S. Army. Schwartz brought along with him two very special guests from a group he was attached to - the Invaders. The men in other were none other than Captain America, the hero of the red, white and blue, and the marvel of modern technology, the Human Torch. It was hoped that these two would be able to provide some insight into this.
It looked a rather odd sight in the cabinet room, with Churchill and the Admiral sitting on one side of the table, with the General and two costumed super-heroes sitting opposite. After the preliminary discussions they began to talk about their mutual problem.
“I have no idea what it is.” said Billiar. “The sightings say it was some form of fire flying across the sky, and it seemed to move with a purpose.”
“You mean as if it were a man?” queried Churchill.
“It is possible, Mr. Churchill.” said the Torch. “I am after all living testament to that, but I can’t move as fast as this man.”
“As far as I can see there is only one conclusion.” said Captain America. “This must be some sort of new Nazi weapon. Perhaps it is a mutant.”
“A what?” said Churchill.
“I agree with the Captain.” said Schwartz. “This must be the Germans. There’s no other answer.”
Suddenly the door to the cabinet room burst open, and two men entered. One was tall with brown hair and wearing a smart black suit. The other was short, with grey hair and beard, carrying a cane and wearing coat tails. They were soon followed by a young secretary.
“I’m sorry, Prime Minister.” she said. “I couldn’t stop them.”
“Who are you?” said Schwartz. “How did you get in here?”
“It is quite alright.” said Churchill. “I know these men. Gentlemen, may I introduce to you Connor McCloud and Doctor Phineas Magus, two members of the Anglo-Force task force.”
“Our British counterparts.” said Captain America, getting to his feet. “I wondered when I would meet you.”
Captain American walked over to Magus and McCloud and shook their hands.
“A pleasure to meet you Captain.” said McCloud. “As soon as we heard about this meeting we came straight over. I take it you are discussing the attacks on the Enterprise and the Lohengrin?”
“Certainly we are.” said Billiar.
“And the possibility that it could be a Nazi attack?” queried Magus.
“Who else would attack British and American ships?” asked Schwartz.
“As of yet we don’t know.” said McCloud, taking a seat at the table. “Magus and I have been monitoring German radio transmissions, cracking some of their code, and they make no mention of a mutant attacking ships. But tell me, gentlemen, if the Germans wanted to attack ships with groups of super-powered men wouldn’t there be more than one?”
“There certainly would be.” said Captain America. “It used to be a tactic of the Super-Axis, but not now.”
“Surely this is the work of that group?” asked Billiar.
“Not at all.” said Magus. “This is the work of a higher power, the work of someone who doesn’t care who wins this war.”
“So you’re saying he could attack a German target next?” said Churchill.
“Not yet.” said McCloud. “If this man is using a pattern of some kind it may be possible to predict his next target.”
“Which is?” asked Churchill.
“H.M.S. Valkyrie.” replied Magus.