The Dawning of the New Age - Chapter Four 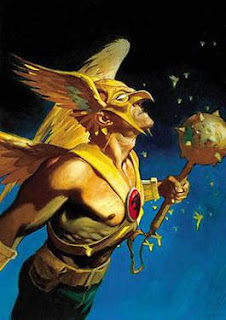 August 23rd, 1944. Today was a happy day for the people of Paris, because it was on this day they finally freed their city, having driven the Nazi regime out without any help from the allies. However, news of this triumph travelled fast, so fast that the allies decided to send a group of their super-powered operatives to help protect the city. The group numbered five, and included Captain America, the Sub-Mariner and the Human Torch from the Invaders, and Green Lantern and Hawkman from the Justice Society. This group decided to travel to France using the Sub-Mariner’s aircraft, a machine considered ahead of it’s time. It was while they were airborne that they picked up something on the radar. Namor was confused, and somewhat amazed at what he saw.
“Impossible!” he said. “I have never seen anything move that fast before!”
He was soon joined at the radar screen by Captain America and Green Lantern.
“I have.” said Captain America. “But not for the past eighteen months.”
“You don’t mean Fire-Flash do you?” said Lantern. “I thought he’d gone to ground!”
Then an almighty explosion could be heard from below.
“What the hell was that?” asked Hawkman.
“I don’t know.” said Namor. “Captain America, can you take the controls? I think those of us who can fly should investigate.”
A minute later Namor, the Torch, Green Lantern and Hawkman flew out of the aircraft and moved on ahead, leaving Captain America at the helm.
It didn’t take them long to see what was happening. For the first time since March of the previous year the red and yellow streak could be seen darting across the sky.
“What is that thing?” gasped Namor.
“Not a thing, but a man.” said Green Lantern. “A man we first encountered last year!”
And with that Fire-Flash suddenly swooped down low above the streets of Paris and unleashed fire blast after fire blast, attacking buildings and the helpless people below.
“We’ve got to stop him!” said Namor.
Namor then flew on ahead of the others, flying as fast as he could. Upon seeing the Atlantean nearing him Fire-Flash stopped in midair and unleashed a flurry of fireballs at him. Namor only just managed to get out of the way. Not far behind Namor was the Torch, who fired some bursts of his own. One of them managed to hit Fire-Flash, and he reeled slightly from the impact. The pain lasted for only a few seconds as he began to run rings around Namor and the Torch. Then Green Lantern came in to join the attack. Using the power of his ring he encased Fire-Flash in a sphere, just as he did eighteen months previously, but this time he made the sphere stronger. This time, however, Fire-Flash concentrated a burst onto one small part of the sphere, and after a few seconds managed to make a hole. Huge flames then came billowing out, striking Green Lantern and forcing him to release his grip. Then it was the turn of Hawkman, who took out his mace and flew towards Fire-Flash. Before he could even attack he found his wings on fire and could do nothing but try to douse the flames. Then, as Fire-Flash began to gloat over his small victories he found a round shield flying up towards him from the ground. The shield only just narrowly missed him, as he looked down and saw Captain America standing on the ground below. Fire-Flash was about to attack when he heard a voice in his head, speaking in his native German. It was a voice he recognised.
“Return to me! You must not waste your time on these petty squabbles!”
This was enough for the Torch to attack once more with a massive fire burst. This burst stunned Fire-Flash as he was sent reeling back hundreds of years through the air. The Torch flew off after him, but suddenly a strange energy beam struck him, and at the same time it struck the others as well. The beam rendered the Torch unconscious, and he fell to the ground. The effect lasted for only a few minutes, and when they came to the sky was empty.
“Where’s Fire-Flash?” asked Green Lantern.
“Blast it! He’s gone again!”

Three hours later another small aircraft was flying towards Paris, but this one was coming from Britain. It’s occupants were the British group known as Anglo-Force, their leader Connor McCloud, Doctor Phineas Magus, Stingray, Doctor Frank Burns and Prince Poseidon of Atlantis. Their radio had been buzzing with news of the attack on Paris, and as soon as they landed at the airport they were greeted by Captain America and Green Lantern.
“It’s good to see you again.” said Captain America. “I take it you’ve heard about Fire-Flash?”
“We’ve heard about nothing else.” said Magus. “Was there anyone with him this time?”
“If there was we didn’t see him.” said Green Lantern. “We were attacked by some sort of energy beam that knocked us out for a few seconds. Once we came to Fire-Flash was gone.”
Then they looked upwards to see the Sub-Mariner approaching. He landed near them a few seconds later.
“I bring news of the German.” he said. “It appears he was carrying out Hitler’s last orders.”
“Which were?” asked McCloud.
“That should they be forced to leave Paris they should burn it to the ground.” replied Namor.
“It doesn’t seem likely that he would carry out this order.” said Magus. “He wasn’t working for Hitler the last time we fought him.”
“But that was eighteen months ago.” said Burns. “Things do change.”
They as they spoke another aeroplane landed, this time carrying out two passengers. Their arrival pleased both Magus and McCloud. The two passengers were Doctor Fate and the immortal Duncan McCloud. After exchanging greeting Magus began to tell of Fire-Flash’s attack.
“There are two possibilities.” said Fate. “That Fire-Flash has left Darkmagus’ employ and sided with the Germans, or that Darkmagus himself as allied himself with the Third Reich.”
“To me both seem very unlikely.” said Magus.

Loch Ness in Scotland was mainly known for one thing - the Loch Ness Monster, but on this day two men made their way along the shoreline of the infamous loch not looking for the more infamous monster but something else. The two men in question were Darkmagus and Fire-Flash.
“Why are we here in Scotland, the enemy of my fatherland?” asked Fire-Flash. “There is nothing here for us, especially in this forest.”
“Ah, but there is my friend.” said Darkmagus. “There is an old saying, what you see is what you get. At the moment what you see are trees and bushes, but in a few moments you will see much more!”
They walked on for a few minutes until they came to a small clearing.
“We are here!” said Darkmagus. “Soon we will begin!”
And with that Darkmagus raised his hands and began chanting in some language that Fire-Flash did not understand. A glow appeared around them as something began to form very slowly in front of them. Fire-Flash was amazed when what seemed like a building began to appear before his very eyes. Brick by brick began to appear as the building began to form. Fire-Flash had never seen a building like this before. Indeed, the design and the structure seemed ahead of it’s time, and after five minutes the building was complete. Darkmagus lowered his hands and smiled at his handy-work.
“What is it?” asked Fire-Flash.
“The true start of my plans.” Darkmagus replied. “It is form here I shall coordinate my operations on this world, and try to prevent what will someday be upon us.”
“Which is?”
Darkmagus turned and stared at Fire-Flash.
“The New Age.”
Darkmagus again raised his hand, and the huge doors suddenly opened at their master’s beckoning. Darkmagus walked into the building, and he was soon followed by Fire-Flash. The German began to wonder at what he saw. They walked down a corridor that seemed to go on for miles. Indeed, it was ten minutes later when they arrived at another door, a door as grand as the previous one. The door opened, revealing what appeared to be a throne room, with a single throne at the head of the room upon a platform. Darkmagus looked around the room and smiled. He then approached the throne and smiled.
“A place fit for a king!” he beamed.
Fire-Flash was impressed with his surroundings, but he was impatient.
“Tell me, master.” he said. “What is the next stage of our plan? Where do we attack?”
Darkmagus leaned back in the throne and sighed.
“We must keep our record of attacking both sides in this war.” he said. “Our last attack was on the allied city of Paris, where we killed one of those who could oppose me in this New Age. Now we must attack the city of another whose offspring may be a threat to me. We must attack Berlin!”
A look of shock appeared on Fire-Flash’s face.
“You cannot be serious!” he said. “Berlin is the place where I was born. I know many people there. My family still lives there.”
“If your family had any sense they would have left when the bombing started.” said Darkmagus. “No, you will attack Berlin, and you will kill anyone you see.”
“I beg of you.” said Fire-Flash. “Why not just give me the name of the one you want killed and I will seek them out and kill them. That way no innocents will be hurt.”
Darkmagus got to his feet and placed his hand around the German’s throat.
“Because I do not know who it is will be chosen, you cretin!” he sneered. “We are too far away from the New Age for me to be able to tell, and for me to wait until they are chosen will be too late! I must kill them now! You will attack Berlin!”
And with that Darkmagus threw Fire-Flash to the ground, leaving the German gasping for breath.
Posted by Julian Radbourne at 01:30:00