The Dawning of the New Age - Chapter Five 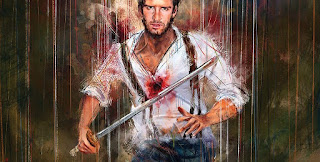 As the rest of the super-heroes departed for Belgium Doctor Magus, Doctor Fate, Connor and Duncan McCloud remained behind to see for themselves the damage caused by Fire-Flash’s attack hours earlier. Luckily no one had been injured in the attack, except for one woman. The sight of the destruction distressed Duncan McCloud somewhat because of his fondness for Paris. As the McClouds began to clear away some of the rubble Magus and Fate began talking to each other.

“I feel the astral seas are stirring.” said Fate. “And this is not caused by the forces of the Third Reich.”
“I know what you mean.” said Magus. “I first had this feeling some eighteen months ago when we first encountered Fire-Flash. I had no idea he was under the control of Darkmagus. I had hoped we would not encounter him again.”
“But isn’t there some sort of special event approaching us Doctor?” asked Fate. “Such an event on that scale would cause Darkmagus great problems.”
“If you mean what I think you mean what won’t be upon us for over fifty years.” Magus replied.
As the two wizards spoke Duncan McCloud approached them. He had a look of concern on his face.
“What is it Duncan?” asked Magus.
“I have this strange feeling.” Duncan replied. “As if one of us is nearby.”
“You mean another immortal?” said Fate.
“Yes. But the only one I’ve encountered in recent months is Connor.”
Duncan began to look around. He then shrugged his shoulders.
“It’s probably just nothing.” he said. “I’m probably just on edge about this Darkmagus thing.”
Duncan McCloud could not have been more wrong. He did not see a lone woman watching them from around the corner. The woman was dressed entirely in black, and a black mask covered her face. In her hand she held a sword, and a sinister smile appeared on her face, as if she was planning something.

It was at first light the next morning when the four of them left Paris in a borrowed military transport vehicle. Magus had decided it was best if they travelled on the ground in order to preserve their energies should they be needed in battle. The roads in the French countryside were virtually deserted. Perhaps the Germans were tucking their tails between their legs after their defeat in Paris. But it was while they were driving along that Connor McCloud noticed something.
“Did you see that in the sky?” he asked, peering upwards out of the window as he drove along.
“What?” asked Duncan. “I can’t see anything!”
“I thought I saw a yellow streak in the sky.” Connor replied. “Wait! Look! There it is again!”
This time Magus looked out the window as well. The familiar red and yellow streak could be seen as plain as day. Fire-Flash had returned.
“He’s not attacking anything or anyone.” said Fate.
“So it would seem.” said Magus. “It may be wise to follow him.”
But just as Magus spoke those words there was a loud bang, as if one of the tyres just burst. Connor had some trouble in keeping control of the truck, but after a few spins the truck came to a halt.
“That’s all we need!” said Duncan. “A burst tyre, and we don’t have a spare!”
Connor began to get out of the truck. As he did he saw a lone motor-cyclist come speeding down the road. He could see that the rider was a woman. He could also see that as she approached him at a speed of nearly sixty miles an hour she started to pull something out of her coat. Before he could tell what it was the woman was near and she attacked him as she went past. Connor looked down at his stomach to see a gaping wound there, the shock of the attack subduing his need to cry out in pain. McCloud looked around to see the others getting out of the truck. As Magus and Fate rushed over to Connor the woman turned around and began to ride back, her sword held aloft in her right hand. Duncan McCloud drew his sword and went to meet the attach, but he took soon found himself with a gaping wound in his midsection, the pain causing him to fall to his knees. Then the woman stopped and looked down at Duncan as he lay on the ground. Allowing herself a slight smile under her helmet she turned the motor cycle around and headed off into the distance.
Magus soon saw that the other McCloud was also in need of medical attention, but he also knew that Fire-Flash was getting away.
“We have only one hope.” he said. “Doctor Fate, go after Fire-Flash.”
“But what about their injuries?”
“I can take care of their injuries.” Magus replied. “You have your task.”
And with that Fate took off and flew towards Fire-Flash. The German was not flying at top speed to it was easier for Fate to reach him, but just as Fate was about to catch up to him Fire-Flash shifted into high gear and flew off at an incredible speed. He was too fast for Fate. The Doctor then hovered in the air for a minute or so, his arms raised above his head. A short time later he returned to the others.

Being immortal the injuries to Connor and Duncan McCloud did not take long to heal. When he returned Fate was surprised at their rate of healing.
“Your healing power still astounds me gentlemen.” he said.
“I take it you were not able to catch up with Fire-Flash.” said Connor.
“You are correct.” Fate replied. “But I was able to determine his route and his destination. Berlin.”
Duncan looked at Magus.
“I take it we’re going after him.”
Magus smiled.
“Your guess is correct, Duncan, as always!”
“Ironic, isn’t it?” said Duncan. “We spend five years trying to bomb the hell out of Berlin and now we’re going there to save it.”