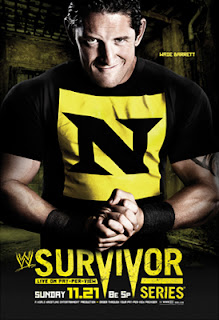 So did John Cena do the right thing by Randy Orton, and sacrifice his career, or did he do the right thing by Wade Barratt, saving his career and freeing himself from the Nexus. That was what I was hoping to find out by watching this year’s Survivor Series, shown live on Sky Box Office in the early hours of this past Monday morning here in Britain.

By now you should know that I’m a massive fan of the former American Dragon, which is why I was looking forward to this match so much.

It was an excellent opener between two of the best on the Raw brand at the moment. Not even a temporary lighting failure could stop this exciting back and forth encounter. Dibiase looked great, but Bryan looked that much better, securing the win as Dibiase tapped out to the lebell lock.

Sadly, his celebrations were cut short when he was attacked from behind by the Miz and Alex Riley. Mr. Money in the Bank went on to declare that it was only a matter of time before he cashed in his contract.

Then it was on to the somewhat intriguing match between Sheamus and John Morrison.

This proved to be a very good match. Sheamus put in a good display of power, with Morrison countering well with his speed, so what could have been a messy mix of styles was the complete opposite.

Morrison came out on top here after taking Sheamus down with a running knee. Our announcers at ringside called this an upset, but that’s something I’d have to disagree with.

I’ve seen numerous Low Ki matches over the past few years, and while this one featured some good action it wasn’t the best in his career.

Don’t get me wrong, it was enjoyable, but it was let down by a few dodgy moments, with Ziggler retaining his title by countering Kaval’s roll-up with a roll though of his own.

Now this is what the Survivor Series should be all about, enthralling elimination matches filled with tons of great drama and great action throughout.

In fact there was so much great action that it would take too long to list here, but having gained a two man advantage for his team Del Rio wasn’t the legal men when he got clobbered by the Big Show. Del Rio was helped to back afterwards.

This proved top be the turning point, with Mysterio’s team coming back strongly, eliminating their foes and getting the win after Show took McIntyre down with a choke slam, leaving Show and Mysterio as the only survivors.

The title action continued as Natalya challenged Michelle McCool and Layla for the Divas title in a handicap match.

The filler material of the evening. A rather short affair. The action wasn’t that bad, but it didn’t exactly set the pulses racing as McCool tapped out to Natalya’s sharpshooter, losing the title in the process.

That wasn’t the end of things. As Natalya celebrated LayCool attacked her from behind, with the returning Beth Phoenix running in for the save.

Solid enough action from these two, with a very interesting back story, but I couldn’t help but feel that we’d seen this all before in their previous feud, and judging by the silence of the crowd at times they felt the same way.

There was some confusion with the ending. After Edge took Kane down with a spear the referee counted to three, and the ring announcer announced Edge as the new champion, only to be told by the ref that both men’s shoulders were on the mat when he made the count as he declared the bout a tie.

The post-match brawl saw Kane attempting to choke slam Edge on the floor before the Rated R Superstar put his man in a wheelchair and rammed him through the ringside barricade. This was actually the most entertaining part of the entire encounter.

This was another match that had that filler material feel about it. Kozlov looked good with his power displays early on, and even Marella looked good at times, but no championship change here as Slater pinned Marella after a clothesline. Not bad, but it would have been better if it had been a bit longer.

The second main event saw Nexus leader Wade Barratt challenging Randy Orton for the WWE title, with John Cena as special referee. Two big stipulations here - if Cena helped Barratt win, he was fired from the Nexus, but if Orton won he was fired from WWE.

An entertaining enough affair, but if anything the performances of both Orton and Barratt were overshadowed by the storyline surrounding Cena’s future as he called the match straight down the middle.

But time and again Orton kicked out of Barratt’s covers, and when Orton grabbed the ropes after Barratt took him out with his slam the tensions finally boiled over, with Cena pushing Barratt right into an RKO, with Orton getting the title retaining pin, which meant that Cena was fired.

Seconds alter the Nexus members hit the ring to attack Cena, only to be fought off with Orton’s help. The show ended with Cena going through the crowd and paying tribute to the fans.

In conclusion - this year’s Survivor Series had it’s good and bad points.

There were some great matches here, particularly the Bryan/Dibiase opener and the Smackdown elimination match, but there were also some that left me feeling a little unfulfilled, namely the Diva and Tag title affairs, and, to a slightly extent, the Kane/Edge match.

So in all this show doesn’t quite get the full thumbs up treatment from me.

One final thing though. Where the hell was the Raw elimination match?
Posted by Julian Radbourne at 22:13:00