Why I Can't Get Excited About The Next "Battle Of Britain" 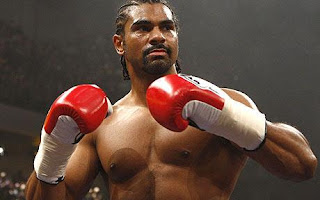 On October 1st, 1993, Lennox Lewis defended his WBC World Heavyweight title against fellow Brit Frank Bruno at Cardiff Arms Park. Dubbed “The Battle Of Britain”, it was a wet and cold night, and the fight was contested in the early hours of the morning so it could be shown live on American television.

Lewis defeated Bruno by seventh round stoppage, and would go on to dominate the heavyweight division for a number of years. He never defended the title against another Brit, and this fight was the only time that two fighters from these shores had ever fought for a version of the World Heavyweight title.

That may all change in November.

David Haye is currently considered as one of the best boxers in the world at the moment. The current WBA World Heavyweight Champion defeated the giant Nikolai Valuev for the title last year. Since then he’s defended against John Ruiz, and although there’s almost constant talk of a fight against one of the Klitschko brothers, both of those fights seem a long way off.

Ten years ago at the Sydney Olympic Games Harrison became the first Brit to win the Gold medal at super-heavyweight. Big things were expected of him when he turned professional. He was touted as Britain’s next big hope in the heavyweight division, a future World champion.

Harrison had the loyal support of the British fans, but as his career went on that support just seemed to ebb away. Harrison wasn’t the sort of fighter you could get behind. His victories seemed laboured, and defeats to the likes of Danny Williams and Michael Sprott just seemed to confirm what fans and pundits alike were thinking, that although he had the talent, Harrison just wasn’t prepared to do that little bit extra to get the job done.

Now while negotiations are apparently complete, and the fight is set for November, it’s been reported that Haye has yet to sign the contract. Since then both men have engaged in the usual war of words, with Haye using his Twitter account to launch a scathing attack on his rival.

But as a huge boxing fan there’s a part of me that really doesn’t care about this fight.

Haye has been like a breath of fresh air in a heavyweight division dominated by eastern European fighters with less charisma than a stone and washed up American fighters trying to re-capture the glory days.

Haye has the talent and the charisma to draw the crowds, but will a fight with Harrison really set the heavyweight division on fire? And has Harrison really done anything to even deserve a title shot? I would have to answer no to both of those questions.

Back in the 90’s Frank Bruno had been mixing it up with some of the top names in the heavyweight division. That’s something you can’t say about Audley Harrison.

Audley Harrison needs this fight a lot more than David Haye. It’s as simple as that, and while I’d love to see Haye mix it up with one of those faceless fighters from the eastern block it looks like he’ll be facing Harrison next.

But given their respective records and the way that their careers have gone it seems obvious that Haye will win, and Harrison will go away doing what he’s done for the past ten years, talking a good game but leaving everyone scratching their heads wondering why someone with his talent has never been able to get the job done.
Posted by Julian Radbourne at 21:25:00