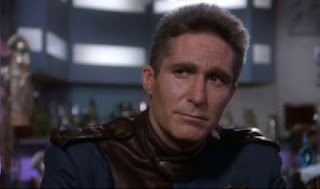 Two days later President Watt sat on the examination table in Med-Lab while Doctor Franklin carried out the second physical examination on him in as many days. A rye smile appeared on Franklin’s face.
“In all of my years as a doctor I’ve never seen anything like it.” he said. “You absorbed enough energy to kill a thousand normal men, and yet I can find no trace of ill health whatsoever.”
“Many doctors have been baffled by my medical history.” said Watt. “Did I tell you about the time I pushed en entire space station through a wormhole?”

Sinclair sat in his officer going over the repair schedule for the station. As he sat his door buzzer sounded.
“Come in.”
The door opened, and Commander Ivanova and Captain Watt entered.
“I just wanted to say goodbye Jeff.” said Watt.
Sinclair got to his feet.
“Leaving already Captain?”
“Admiral McCarthy at Starfleet Command has asked me to personally take Queeg back to Earth. I can’t say it’s a pleasure, but I’ve found it’s not wise to question the good Admiral.”
“Now is normally the time I’d ask you if you enjoyed your time on the station.” said Sinclair.
“I know what you mean.” Watt responded. “Perhaps on our next visit there will be less phaser fire!”
Watt turned to Ivanova.
“Well Commander, it’s been good to see you again.”
“Likewise Captain. I hope to see you again soon.”
Watt shook Ivanova by the hand. He then did the same with Sinclair. Ten minutes later Sinclair and Ivanova stood in Operations, looking out towards the jump-gate as the Valkyrie entered.
“Do you’ll think they’ll ever find them?” asked Ivanova.
“Who?”
“Those on the Yorktown and the Aswan?”
“I get the feeling that we’ll hear from the Orks very soon.”