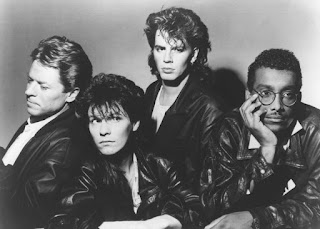 It’s 1985, and I’m sitting in my living room watching breakfast television trying to get ready for school. Then I see something that piques my interest, an item about how two guys from Duran Duran and a guy from disco giants Chic had joined up with a well-dressed bloke to form what would be one of the 80’s greatest super groups.

The guys in question were John and Andy Taylor from Duran Duran (no relation to each other), Tony Thompson from Chic, and solo great Robert Palmer. The song I heard was called “Some Like It Hot”, and collectively they were known as The Power Station.

As a hard rock fan I was surprised by what I saw. These new wave and disco guys were putting out a hell of a song. The Taylor boys were playing like they belonged in Whitesnake. Thompson’s drums were almost deafening, while Palmer was, well, Palmer was as laid back as he always was.

Originally this band was only meant to be a one-off kind of thing, put together to record a single album while the Taylor boys were on holiday from Duran Duran, but the success of the thing meant that the boss-types wanted the band to tour, which was something that Palmer didn’t, or couldn’t, do because of his solo commitments.

This led to the recruitment of actor/singer/former glam rocker Michael Des Barres, and what followed was a tour of the States, an appearance on Miami Vice, and a slot on the biggest gig in the eighties, Live Aid.

And that was it. After one album and one tour the band broke up and went back to their day jobs. Turns out though that The Power Station would end up being one of the best bands to come out of the 1980’s, and although what they left behind probably couldn’t be described as a legacy, they certainly left a lasting memory.

Rumours of a reunion did the rounds for a decade until the original four got back together in 1996 to write some new songs. Personal problems meant that John Taylor had to withdraw from the recording of their second album, Living in Fear. His place was taken by Chic bassist Bernard Edwards.

The unexpected death of Edwards meant that the three remaining members toured with sessions musicians until the band broke up again. Sadly both Palmer and Thompson passed away in 2003, and in 2019 another version of the band, featuring Des Barres and Andy Taylor, formed.

This Mix Tape contains the four Power Station songs that reached the U.K. charts, three from their 1985 album, and one from 1996, as well as several tracks from Duran Duran, Chic and Robert Palmer. There’s also a solo effort from Andy Taylor, as well as a track from Arcadia, the second Duran Duran spin-off group that included Simon Le Bon, Nick Rhodes and Roger Taylor.


Don't forget you can listen to the previous mix tapes and my podcast over at https://www.mixcloud.com/julian-radbourne/
Posted by Julian Radbourne at 23:50:00