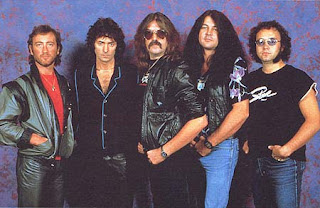 Back in June I concluded a three-part series looking at the work of heavy metal pioneers Deep Purple. The band enjoyed tremendous success and a series of line-up changes until they disbanded in 1976. Many of the members went on to enjoy a great deal of success with other projects, the most notable ones being Gillan, Whitesnake and Rainbow.

In 1980 there was hope that Purple would reform, but this turned out to be an attempt by original singer Rod Evans to cash in on the band’s continuing popularity as he toured the United States with a bunch of unknown session musicians. It cost Evans dearly when the official Purple camp took him to court, and as Evans couldn’t afford the resulting fine he ended up forfeiting all of his future Deep Purple royalties.

The band officially re-formed in 1984 with the classic Mark II line-up and the release of the Perfect Strangers album, followed three years later by The House of Blue Light and the twentieth anniversary re-recording of Hush in 1988.

The band toured throughout, but by 1989 the shine was gone. The relationship between singer Ian Gillan and guitarist Ritchie Blackmore went down the pan again. Gillan was fired in 1989 and was eventually replaced by former Rainbow front man Joe Lynn Turner.

The work featured here may not have the same aura as their work in the 1970, but it still stands up as a fine example of their work, with Perfect Strangers, Knocking at Your Back Door and Bad Attitude showing that they could still hold their own when compared to their 80’s glam metal counterparts.

Don't forget you can listen to the previous mix tapes and my podcast over at https://www.mixcloud.com/julian-radbourne/
Posted by Julian Radbourne at 23:03:00