The Two Sheds Mix Tape #10: More Music From the Year I Was Born - Soundalike Style! 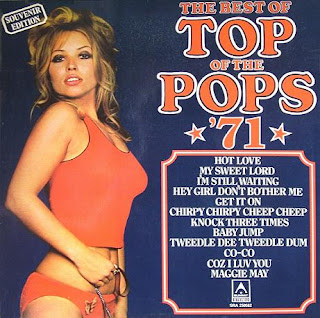 With the Mix Tape series having reached number ten it seems fitting that we once again take a look at music from the year I was born, 1971. But this time around there’s a slight difference.

You see, when the Top of the Pops television series was launched way back in 1964 the powers that be at the mighty BBC made one big mistake - they didn’t actually copyright the name. This meant that four years later Pickwick Records, on their Hallmark label, were able to launch a series of albums under the Top of the Pops names containing the hits of the day, selling them at a budget price.

Although these albums contained songs that had made it big in the singles charts the songs were actually recorded by a studio group made up of session musicians. The plan was to copy the original recordings as closely as possible, with the musicians remaining largely uncredited, although it was later revealed that the early recordings featured a certain Elton John. In recent years the albums have been credited to the “Top of the Poppers”.

These albums proved to be incredibly popular and sold by the bucket load, with new albums released every couple of months or so. The series lasted until 1982, with a further, single release in 1985, and although there had been countless other soundalike series over the years the Top of the Pops series was the most popular. They’re even available on streaming services such as iTunes today.

So using their vast archive of over one thousand tracks I’ve re-created the first volumes of the Mix Tape series in Top of the Pops style. Sadly the Poppers didn’t record all of the tracks I used, so there’s only eighteen tracks here, and they are…..

Don't forget you can listen to the previous mix tapes and my podcast over at https://www.mixcloud.com/julian-radbourne/
Posted by Julian Radbourne at 00:20:00