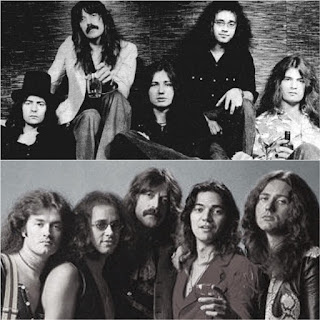 By 1974 singer Ian Gillan and bass player Roger Glover had left the band, to be replaced by the somewhat-unknown David Coverdale and Trapeze’s Glenn Hughes. The addition of Hughes meant that the band had two outstanding vocalists for the first time.

The new line-up hit the ground running and debuted with one of the most under-rated albums of all time, 1974’s “Burn”. The album was stylistically different to those of the past few years, with some progressive rock leanings mixed in with the blues and funk harmonies provided by the dual vocals of Coverdale and Hughes.

More extensive tours, including a memorable performance at the California Jam festival, and a second album, “Stormbringer”, soon followed, and although the album was a success guitarist Ritchie Blackmore publicly criticised it. Tensions within the band eventually led to Blackmore quitting in 1975.

Blackmore’s departure left a huge void. The band wanted to continue, but who could replace him? Names such as Rory Gallagher and Mick Ronson were mentioned, until the unenviable task went to American Tommy Bolin, famed as a session musician, for his solo work, and for stints in bands such as Zephyr and the James Gang.

What followed was 1975’s effort “Come Taste The Band”. Many die-hard fans don’t really think of this as a proper Deep Purple album, but personally I think it’s one of their most under-rated efforts. Although initially rejuvenated with a new funk-rock sound, it proved to be the end of the beginning.

Bolin’s ongoing drug problems meant that some of his live performances weren’t up to scratch, and he was openly booed on stage. Hughes was also dealing with his own drug problems, and after a show in Liverpool in March 1976 original members Jon Lord and Ian Paice decided enough was enough and split the band. Moments later Coverdale went into their dressing room and handed in his notice, only to be told that there wasn’t any band to leave. The split was officially announced in July of that year, and sadly, just five months later, Bolin lost his battle and passed away at the age of 25.

Which leaves us with this play list, a collection of singles, B-sides and album tracks which, for a while, looked like it would be the final efforts of one of the greatest bands in history. But then, eight years later…..but that’s another story for another day. Here’s the track list.

Don't forget you can listen to the previous mix tapes and my podcast over at https://www.mixcloud.com/julian-radbourne/