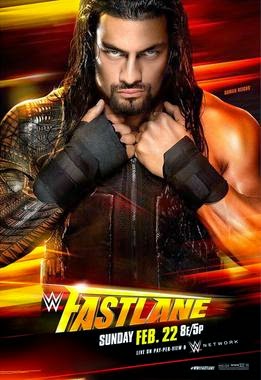 It was an event that met with a great deal of apathy in it's run-up, but did it fulfil the somewhat low expectations that had been placed on it? That was what I was hoping to find out by watching WWE's latest pay per view offering, Fastlane, shown in the early hours of this past Monday morning on Sky One and Sky Sports here in Britain.

You know, matches made at very short notice can often be quite enjoyable, which was the case here. We had some nice exchanges early on between Ziggler and Rollins, and things really got going when Rowan accidentally hit the ring post with his leg and the Authority boys began to use him for target practice.

Needless to say that Rowan eventually made it back to his corner so Ryback could come in and clean house with some impressive looking moves, but when Ziggler tried to do his thing again Kane caught him in the corner and held him in place so Show came up from ringside and delivered his knockout blow. The Corporate One then slammed Ziggler down to the mat and took the pin.

Then came the big return. As the Authority boys dished out more punishment Randy Orton appeared out of nowhere and cleaned house. Show managed to save Rollins from a beating though, with Rollins heading for the hills.

Oh, and for a guy who is meant to be out of shape Orton didn't look too bad, did he?

Then it was on to the battle of the brothers as Stardust took on Goldust.

How best to describe this one? For what it was it was okay, although the fans in attendance didn't seem that interested. Both brothers put in credible performances, with Cody....I mean Star getting crazier as the match went on.

But perhaps the weak point of the match was the ending. When it looked like Star was going for shattered dreams Goldie countered with a snapmare before rolling his brother up for the three count. The younger Rhodes boy was none too happy with the result, especially when he reluctantly shook Goldie's hand, although he would go on to gain a measure of revenge a few moments later when he attacked his brother backstage.

The first title match of the evening saw Tyson Kidd and Cesaro challenging Jimmy and Jey Uso for the Tag Team titles.

Now this was pretty good. It was the first time I'd seen Kidd and Cesaro together as a team, and although I had my doubts about them at first I have to admit that they seemed tailor-made for each other, and even though it's early days for them as a unit they have the makings of a great team.

The Usos put in their usual stellar effort, with Jimmy acting as crash test dummy while Kidd and Cesaro worked him over, but when he managed to get the hot tag to his brother things were really taken up a notch or three. All four men really upped their game in this segment, especially when Kidd was matching the brothers in the aerial department.

But as the old saying goes there could only be one winner, and new champions were crowned when Kidd took Jimmy (or was it Jey?) down with what could be described as a fisherman's neckbreaker for the title-winning pin.

Then it was on to the confrontation between Triple H and Sting, setting up their historic confrontation at Wrestlemania. You know what? For the first time in years I'm actually quite excited about a Sting match.

The ladies were up next as Paige challenged Nikki Bella for the Divas title. Moving on.....

I think the best way to describe this one would be short and sweet, and a little wild. Ambrose was at his crazy best as he took it to the boy from Preston, who made it pretty obvious that he didn't want anything to do with the lunatic fringe. Barrett eventually managed to seize control of the encounter, but Ambrose was always in with a chance and kept coming back for more.

Ambrose soon lost control of his temper though. He battered Barrett as he lay in the corner, and when he refused to listen to the referee's orders the official had no choice but to disqualify him, giving Barrett the win. It didn't matter to Ambrose that he'd lost though, and after taking Barrett down with his DDT he grabbed the title belt and headed backstage.

Then came the second big segment of the evening, with the druids bringing a coffin down to ringside to reveal.....nope, not the Dead Man, but Bray Wyatt, setting up the Undertaker's annual Wrestlemania return.

If the aim of this match was to make Rusev look like an unbeatable monster then it was mission accomplished. This was the best match I've seen from the big men, but then again that was in no small part due to his opponent.

Say what you will about Cena, and many of you have over the years, but he put in a hell of a stint here. Okay, his spot calling was a little too audible at times, but it was one of his better performances in recent times. The somewhat grizzled veteran role seems quite fitting for him as he tried to take the new kid on the block down, only to find out that the new kid wasn't as east to take down as he thought he was, with the man from Moscow surviving a crossface, and STF, and the attitude adjuster.

So having survived Cena's onslaught Rusev locked in his accolade finisher. It looked like Cena was about to go down until he managed to get back to his feet with Rusev on his back. That was when the lovely Lana came into play, distracting the referee so Rusev could deliver a kick south of the border. He then locked in the accolade for a second time, and with Cena in la-la land the referee had no choice but to stop the match and give Rusev the submission win.

The main event saw Roman Reigns taking on Daniel Bryan, with a WWE World title match against Brock Lesnar at Wrestlemania on the line.

As far as main events go this was pretty decent, although saying it was decent may be underplaying things a little.

For about twenty minutes these two gave us a great back and forth encounter. As the old saying goes the storytelling was spot on throughout as they fought for the right to compete in the biggest match of their respective careers.

Bryan looked back to his best. In fact his performance here, and this whole match for that matter, made me think of his Ring of Honor tenure. All of the great stuff was there, and I was a little surprised that he never reminded the referee about five counts.

As for Reigns this was probably the best performance of his singles run. The guy looked kind of special throughout, and his brawling and power were the perfect foil for Bryan's special brand of technical wrestling.

There were quite a few highlights, probably too many to mention here, but mention must be made of  Reigns' top rope powerbomb, and, of course, the finish, when Reigns countered Bryan's second running knee with the spear to take the Wrestlemania-booking win.

Then we got the nice touch at the end, with Bryan urging Reigns to win the title at Wrestlemania before offering him the hand of congratulation.

In conclusion - so was the show that was greeted by so much disdain turn up to be a complete dud? Well, I hate to tell you this kiddies, but this writer quite enjoyed his three hours of viewing.

Fastlane proved to be quite entertaining. I pretty much enjoyed everything I saw. The Sting/Triple H and Bray Wyatt segments were well played out, and all of the matches delivered what they set out to do, and although we were once again without a WWE World title match the main event more than made up for that slight disappointment.

As for my prestigious match of the night no-prize you can probably tell who's going to get it this time around, and you'd be right if you said the Reigns/Bryan main event battle.

So with all of that out of the way there's just one more thing left to do, and that's to give Fastlane the thumbs up.
Posted by Julian Radbourne at 13:51:00