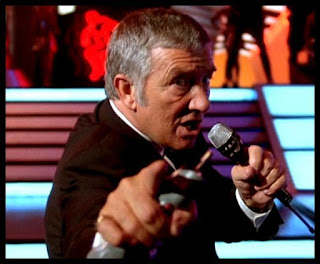 Watt entered an old abandoned building. When he entered the first thing he saw was an old locker room. He looked around and saw the skeletons of previous contestants. He continued further into the building.
Suddenly, for some reason, he began to feel drowsy and sick. Then, from outside, he heard a noise that was familiar to him. It was the noise if a small jet engine. He wondered why he would hear a noise in this zone. He then heard the door to the building slam open, closely followed by the sound of footsteps. As he heard these noises he continued to feel more drowsy. Then the door opened behind him, and he saw Fireball standing in the doorway. Fireball raised his flamethrower and aimed it at Watt. A second later he fired, and Watt was completely covered by flames. About a minute later Fireball turned off his flamethrower. He was as surprised as the previous stalkers when he saw Watt just standing there, his fire-proof costume, and his entire body, in tact after his attack. But Watt was growing visibly weaker by the minute. Fireball knew that he could not defeat Watt with his weapon. He knew he had to use more conventional methods. Fireball approached Watt and hit him square on the jaw. Fireball was surprised when he saw that this had some effect on Watt. Another blow to his stomach doubled him up. Unlikely as it was, Fireball’s firsts were having an effect on Watt. Watt began to stagger out of the way, through to another part of the building. Fireball had ignited his jet-pac and flew after Watt. A few seconds later he barged Watt in his back, sending him flying into one of the rooms. This room was pitch black, but in the corner of the room there was this machine. The machine was giving off a red light. Watt then heard Fireball walking down the corridor. Watt again looked at the machine. He recognised the glow. The machine was the cavourite generator that Moriarty had installed. It was the machine that was creating the energy shield around the gaming zone. Then, Fireball entered the room. He again had his flamethrower in his hand. Again he aimed at Watt. Watt, however, was lying in front of the cavourite generator. Fireball then pressed the button on his flamethrower, and a burst of flame shot out towards Watt. Watt just managed to move out of the way, and the flame hit the generator. There was an explosion as the generator went up in flames. The cavourite shield was now gone. Fireball did not know what had happened. The smoke from the explosion began to clear, and Watt was nowhere to be seen. Suddenly there was a tap on his shoulder. Fireball turned around to see Watt standing in front of him, a smile on his face. A blow to the head from Watt sent Fireball flying. He was unconscious before he hit the ground. With the generator now down Watt was able to leave the gaming zone.
Another commercial break had begun as soon as the battle had finished. Killian entered the control room. As soon as he entered he saw the champion stalker, Captain Freedom, talking to one of the security guards. As soon Freedom saw Killian he marched over to him.
“Get suited up, Cap!” said Killian. “You’re on next!”
“No way!” said Freedom. “I may be the champ, but there’s no way I’m talking part in a scam like this!”
“What are you talking about?” said Killian. “All of this, this entire show, is above board!”
“That’s crap, and you know it!” said Freedom. “This is all about getting revenge because this Watt guy insulted you! I want no part of it!”
“May I remind you, Captain, that your contract is up for renewal at the end of the season.” said Killian.
“Well you know where to stick your contract, Killian!”
And with that Captain Freedom marched out of the control room. Killian now knew he was in deep trouble.
At the entrance of the tunnel from the studio the crowds had dispersed, and the battered stalkers, Sub-Zero, Buzzsaw, Dynamo and Fireball began to return. Then, from above, and with the aid of a jet-pac, Moriarty landed near them.
“Stalkers!” called Moriarty. “We must re-group. As I speak Anglo-Force, along with Supercop and Mighty Man, are on their way here. We must plan our attack against them!”
“Screw you!” said Buzzsaw. “We can’t handle Watt on his own. How do you think we’re gonna handle seven of ‘em!”
“You can’t just give up now!” said Moriarty. “We must deal with them!”
“Deal with them yourself!” said Fireball. “This scam of Killian’s is over! Watt was too much for us!”
“Are you mad?” screamed Moriarty. “You can’t just curl up and lick your wounds!”
“Go screw yourself Moriarty!” said Buzzsaw. “We’re going back to the studio!”
And with that the battered and bruised stalkers began to make their way back to the studio for some well-needed medical attention. Moriarty was now on his own. Then he heard footsteps behind him. He swung around to see Watt standing in front of him.
“It’s over Moriarty.” said Watt. “No stalkers, no cavourite energy shield. The plan failed.”
“I have not finished yet.” said Moriarty. “My fighting skills are far more advanced than yours!”
And with that Moriarty hurled his shield at Watt in hope of causing him some injury. Instead, Watt caught the shield and snapped it in two.
“I said it’s over!” Watt shouted.
And with that Watt took to the sky and headed towards the studio.

The commercial break was still running. Killian sat nervously in the control room. He had to some up with something that would stop him from looking like a fool. Then, he came up with the idea. He walked over to one of the technicians who was seated at a computer terminal.
“Could we create our own finish with Watt and Captain Freedom?” he asked.
“I’m way ahead of you chief. Watch this!”
The screen was switched on. The scene started with Watt falling into a put. Killian watched the scene, and a broad smile began to appear on his face.
“How long until all of this is ready?” he asked.
“It’s ready now!”

Meanwhile, Anglo-Force, Mighty Man and Supercop had arrived in the gaming zone. They had each split up so they could search for Watt at a much faster rate. They all met up in the first quadrant of the gaming zone.
“There’s no sign of him anywhere.” said White Knight.
“All I found was dead bodies.” said Supercop.
“Wait!” said Star Man. “Look!”
Star Man pointed to the huge video screen above them. It showed a scene from the television studio. The commercial break had just ended, and Killian was coming back on stage.
“He folks!” he smiled. “There has been a new development! Captain Freedom has entered the final game quadrant, and is, as we speak, doing battle with Captain Watt! Let’s go over there now, live!”
“That’s rubbish!” said Fire-Master. “I checked that area myself! There’s nothing there!”
The scene changed to that of a pit. Watt fell into the pit, and a huge metal gate slammed shut behind him. Watt lat on the floor when Captain Freedom arrived. Freedom pulled Watt to his feet and unleashed a barrage of blows on Watt. These appeared to have some effect on him. Watt came back, however, with some blows of his own which bloodied Freedom’s lip. Freedom then placed his hands around Watt’s neck, and Watt retaliated by doing the same. After a few seconds Watt appeared to be winning this battle of the choke holds. A foot to the stomach then forced Watt to released his choke hold, and then Freedom connected with an elbow to the jaw. He then picked Watt up and began pushing him to a wall. The wall had five ten inch metal spikes. Freedom pushed Watt closer and closer to the spikes, and then Watt crashed into the wall. Blood flew everywhere as Watt was impaled on the spikes, which stuck out of his chest and stomach. The audience in the studio were shocked. Watt had easily defeated the other stalkers. Now he had been defeated by Captain Freedom.
Outside Red Sun was shocked. She thought Watt was dead.
“There’s no way those spikes could have killed Jim!” said White Knight. “Not even if they were made of adamantium!”
“Well, there you have it!” said Killian in the studio. “The demise of Captain Watt!”
Then the whole studio began to shiver and shake. Suddenly the whole wall came crashing in. Bricks and mortar began to fly everywhere. When the dust settled Killian was shocked to see Watt standing in the studio.
“Go to a commercial!” Killian screamed. “Go to a commercial!”
Watt walked through the rubble until he was face to face with Killian. In his hesitation Killian dropped his microphone. The audience were even more surprised now, and very confused. A few minutes earlier they had seen Watt die, and now he was standing in front of them. Watt then grabbed Killian by his lapels and lifted him off the ground.
“The show is over!” said Watt. “I’ve gone through all of your stalkers, and now it’s just you and me!”
The security guards began ushering the audience away. A small team of guards then surrounded Watt and Killian.
“I can tell you’re fed up, James!” said Killian. “But it’s only a game! It was only a test!”
Watt lifted Killian higher into the air, and the security guards raised their pistols. Then they heard a voice behind them.
“Drop your weapons!” said Red Sun. “Or I’ll roast you like a Russian potato!”
The guards quickly laid their guns to the ground, and they beat a very hasty retreat. The others then just watched as Watt continued to hold Killian in the air.
“I’ll give you anything!” begged Killian. “Money, a beach house, a new sports car! Anything!”
“What I have in mind will do just fine!”
With one hand Watt hurled Killian across the studio, sending him flying into the back of the set. The set then collapsed around him. Killian scurried as he tried to move the plastic and wood from on top of him. Then Red Sun walked over to Watt, and they embraced for a few moments. Mighty Man then walked up to Watt.
“You know, if you wanted to you could bring a lawsuit against Killian, and the studio for that matter!” he said.
It’s not worth it!” said Watt. “Killian will be in enough trouble as it is. Anyway, I get the feeling his little show won’t last much longer!”
Then, Anglo-Force, Supercop and Mighty Man walked off the set. Anglo-Force were soon on their way back to Britain. But when Watt said that “The Running Man” would not last much longer there was never a more un-true word spoken!